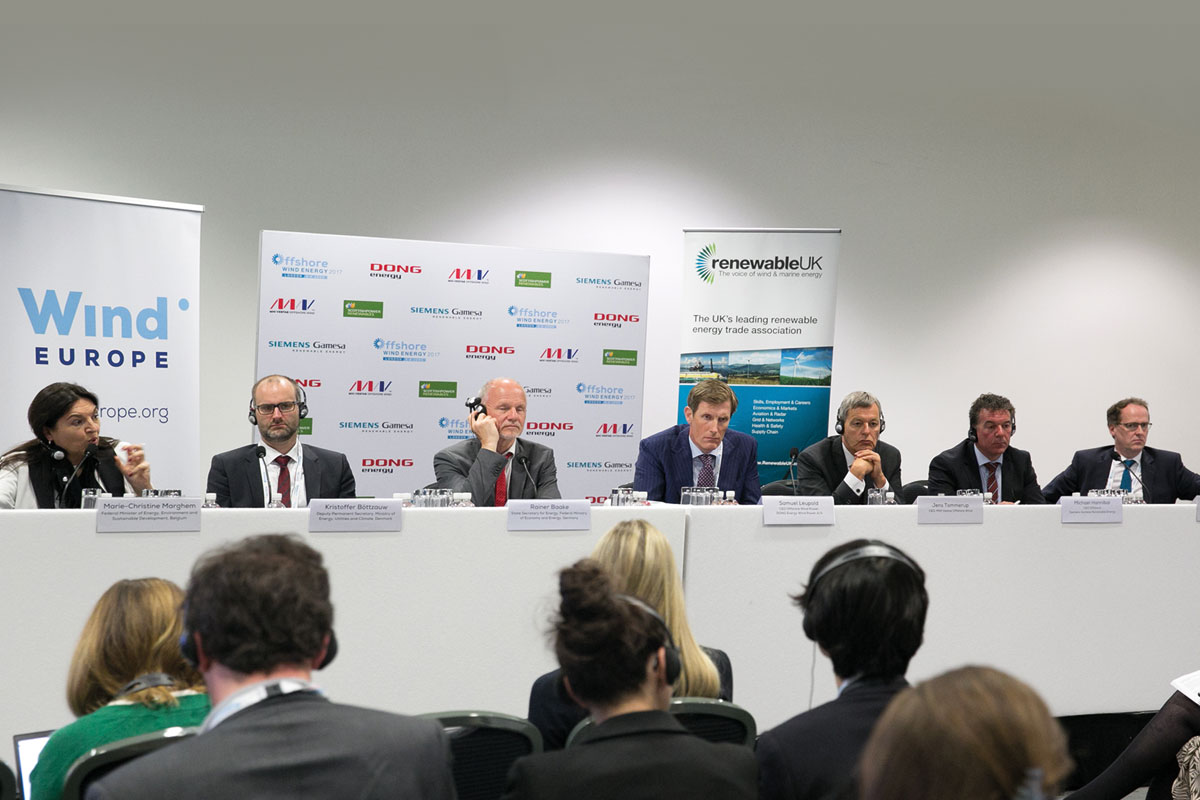 The governments of leading offshore wind markets, Germany, Belgium and Denmark came together with industry captains today in signing a Joint Statement to further the deployment of offshore wind energy in Europe. The signing ceremony took place at the opening of Offshore Wind Energy 2017, the industry event co-organised by WindEurope and RenewableUK in London.

The signatory governments represented by Marie-Christine Marghem, Minister of Energy, Environment and Sustainable Development, Belgium, Rainer Baake State Secretary for Energy, Federal Ministry of Economy and Energy, Germany and Kristoffer Böttzauw, Deputy Permanent Secretary, Ministry of Energy, Utilities and Climate, Denmark, reaffirmed their commitment of deploying a significant volume of offshore wind power in Europe between 2020 and 2030. Signatory governments welcomed the cost reductions in offshore wind achieved to date and the intention of the industry that offshore wind keeps reducing its costs so Europe remains the global leader in the sector. 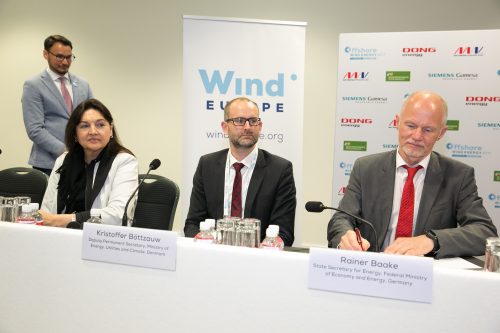 The industry has been on a steep cost reduction curve and has met its self-imposed target of €100/MWh by 2020 ahead of time. Winning bids of auctions in the Netherlands, Germany and Denmark delivered up to 48% cost reduction compared to projects just 2 years ago.

Delivering further cost reductions will require the deployment of significant volumes of new offshore wind. But most Governments in Europe have still to define clear plans for how much new offshore they intend to deploy, notably beyond 2023. The industry therefore calls on European governments to collectively ensure there is 60 GW, or at least 4 GW per year of new deployment in the decade after 2020. Going beyond 4 GW per year would enable the industry to become fully competitive with new conventional generation ahead of 2030.

To deliver on these volumes, government and industry signatories committed to build on public-private cooperation to facilitate investments in projects and associated infrastructure. Crucially, they pledged to work towards the necessary European framework supporting Europe’s common renewable energy trajectories in part by calling on the European Commission to mobilise dedicated funding for strategic joint projects for offshore wind energy. 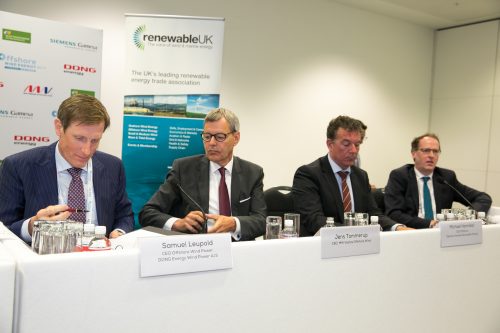 60 GW, which the industry intends to deploy between 2020 and 2030, represents only a fraction of the potential of offshore wind energy in Europe. According to a new resource assessment by BVG Associates released today, offshore wind could in theory generate between 2,600 TWh and 6,000 TWh per year at a competitive cost – €65/MWh or below, including grid connection and using the technologies that will have developed by 2030. This economically attractive resource potential would represent between 80% and 180% of the EU’s total electricity demand.

This joint initiative serves as a strong reminder that leading European businesses and Governments are united in their determination to accelerate the transition to low-carbon energy, to reap the economic benefits that will come from that – and in the process to uphold the non-negotiable letter and spirit of the Paris Climate Agreement.

Samuel Leupold, CEO, DONG Energy Wind Power: “More than ever, we need countries to coordinate and lay out a clear vision. A visible and steady pipeline of projects between 2020 and 2030 will allow for continued cost reductions, a thriving supply chain and continued European leadership in an increasingly international market for offshore wind. We welcome the joint statement and call on other governments to commit to robust volumes.”

Jens Tommerup, CEO, MHI Vestas Offshore Wind: “Quite simply, the future vitality of offshore wind depends on clear and consistent volumes in the market. Visible and reliable deployment targets will unleash investments and competition in the market. And they will drive technological breakthroughs and the continued globalisation of the industry.”

Keith Anderson, CEO, ScottishPower Renewables: “The industry has delivered cost reductions ahead of all expectations and way beyond any other generation technology. But the report released today shows we only use a fraction of the resource potential available in the European sea basins. We need to deliver an offshore wind industrial strategy driven by innovation and technology development to tap into the massive offshore wind potential.”

Michael Hannibal, CEO Offshore, Siemens Gamesa Renewable Energy: “We will continue with technological innovation, testing and industrialisation to reduce costs going forward. But it’s absolutely necessary to have sufficiently large volumes for offshore wind deployment. We need to build on the Joint Statement and create a strong market for offshore wind in Europe. This will deliver sustainable offshore wind energy to society and allow manufacturers to maintain global technology leadership.”

Giles Dickson, CEO WindEurope: “10 European countries have been cooperating on the development of offshore wind energy for a year now, working to align policies, share expertise and address regulatory barriers. With this Joint Statement, leading businesses and governments are taking the next step by committing to cooperate on the deployment of big volumes for offshore wind energy. Today’s statement is a clear recognition of the strategic importance of offshore wind as a clean, competitive and reliable energy source for Europe.”

Hugh McNeal, CEO, RenewableUK: “Offshore wind is already delivering economic benefits to local communities through major inward investment and job creation. This report shows how we can maximise these benefits by increasing our ambition for this innovative renewable technology. An industrial strategy which puts offshore wind at its heart can secure billions more in investment and deliver cheaper electricity for consumers”.

High resolution images of the opening session and press conference are available here.