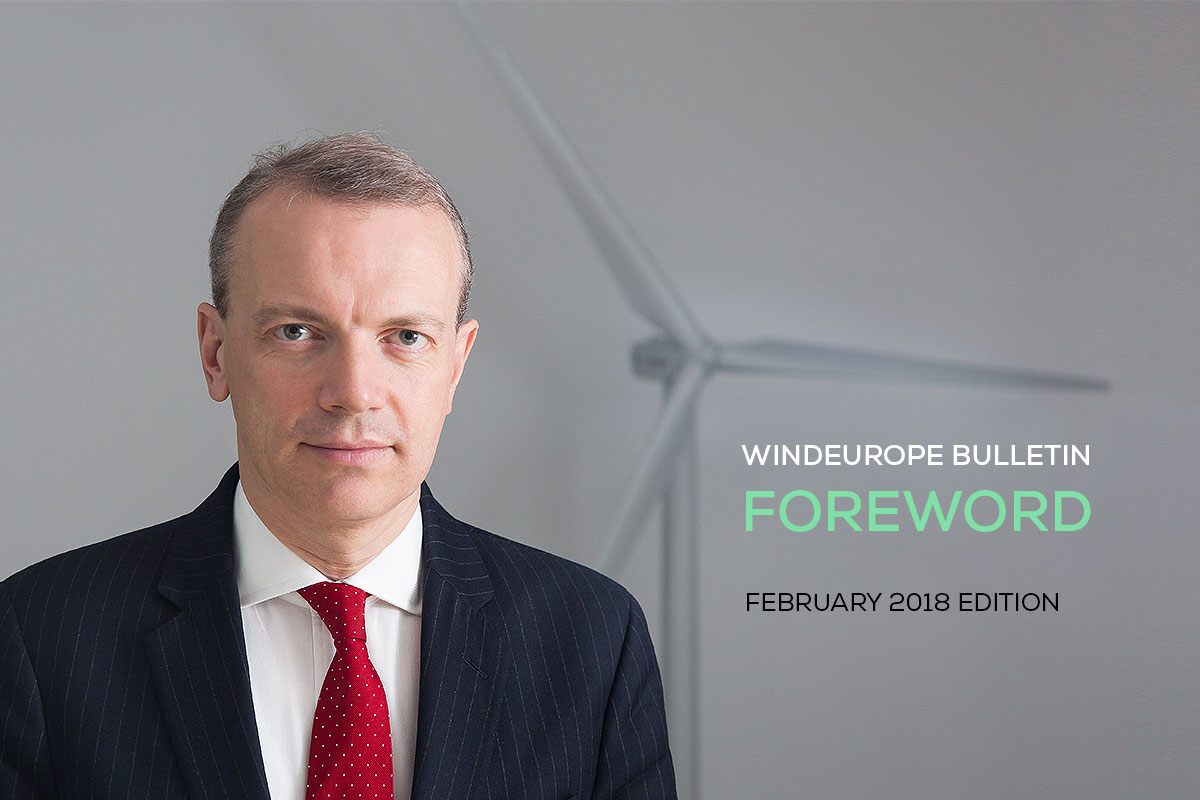 As you may have seen, the European Parliament voted the other week that the EU should raise its 2030 renewables target to at least 35% – rather than 27%The Parliament and Member States now need to negotiate the final target and other aspects of the EU’s Clean Energy Package for 2030. And those negotiations start this month. See my video message for more detail.

The key question in the negotiations is will the Member States be willing to agree a higher target and how much higher than 27%. We need your help to spread the message with national Governments that a higher target makes sense economically. My video has the key facts and figures. And our recent publication Local Impact, Global Leadership spells it out in more detail. In a nutshell: the more renewables Europe has, the more consumers will benefit – wind is now the cheapest form of new power generation in Europe. Wind is also a key part of European manufacturing and exports: we support 263,000 jobs in Europe and contribute €36bn to EU GDP. A 27% target would put all that at risk. The difference between 27% and 35% in wind is €92bn investments and 136,000 jobs. Other sectors would miss out too: every €1,000 invested in wind creates €250 value for the wider supply chain including chemicals, steel and construction.

We had a social media campaign ahead of the Europe Parliament vote on the 35% target, and many of you shared the posts (you can see an example here) targeting their members of European Parliament. Many thanks for that. We will do more of this targeted at the national Governments in the coming months so stay tuned.

Also if there was ever a moment to get in touch with your local Member of Parliament it would be now. Invite him/her over to explain what more ambition on renewables means for your business. National Governments need to hear this from as many people as possible and MPs, especially in governing parties, can really help.

Can I extend a big “thank you” to all of you who reached out to Members of the European Parliament (MEPs) before the vote on 35%. WindEurope members: between you, you sent over 300 individual emails to different MEPs. And many of you posted messages on social media. It made a difference. Please keep it up now as we lobby national Governments to support a higher target and as national Governments write their National Plans for 2030.

Then on Wednesday 20 February we’re organising a ‘Grids meet Renewables’ conference and best practice fair in Brussels. It’ll look at best practices in the planning and development of renewables and transmission & distribution grid investments – and how to manage energy networks and infrastructure with growing shares of renewables. We hope you can join us for that.

The next day (21 February), we’re also organising in Brussels a Wind Research and Innovation workshop as part of the European Technology and Innovation Platform. The aim is to identify new opportunities for the sector to ensure Europe remains a global leader in wind energy technology. The workshop outcomes will feed into the EU’s next R&D Funding Programme (“FP9”). The day will start with a breakfast for policymakers on research in next generation offshore wind turbines and their role in meeting our cost reduction challenge.

Our main event this year is the Global Wind Summit in Hamburg on 24-28 September. We’re expecting 35,000 visitors from more than 50 countries. If you want to speak at the conference, submit your abstract by 4 April 2018. For more information on booking a stand see here.

Finally, we sat down this week with the CEO of Vattenfall Wind, Gunnar Groebler, to discuss the key ongoing developments in wind. The interview covers PPAs, electrification, and what “zero subsidies” means for wind. I thought it would be good to share it with you.