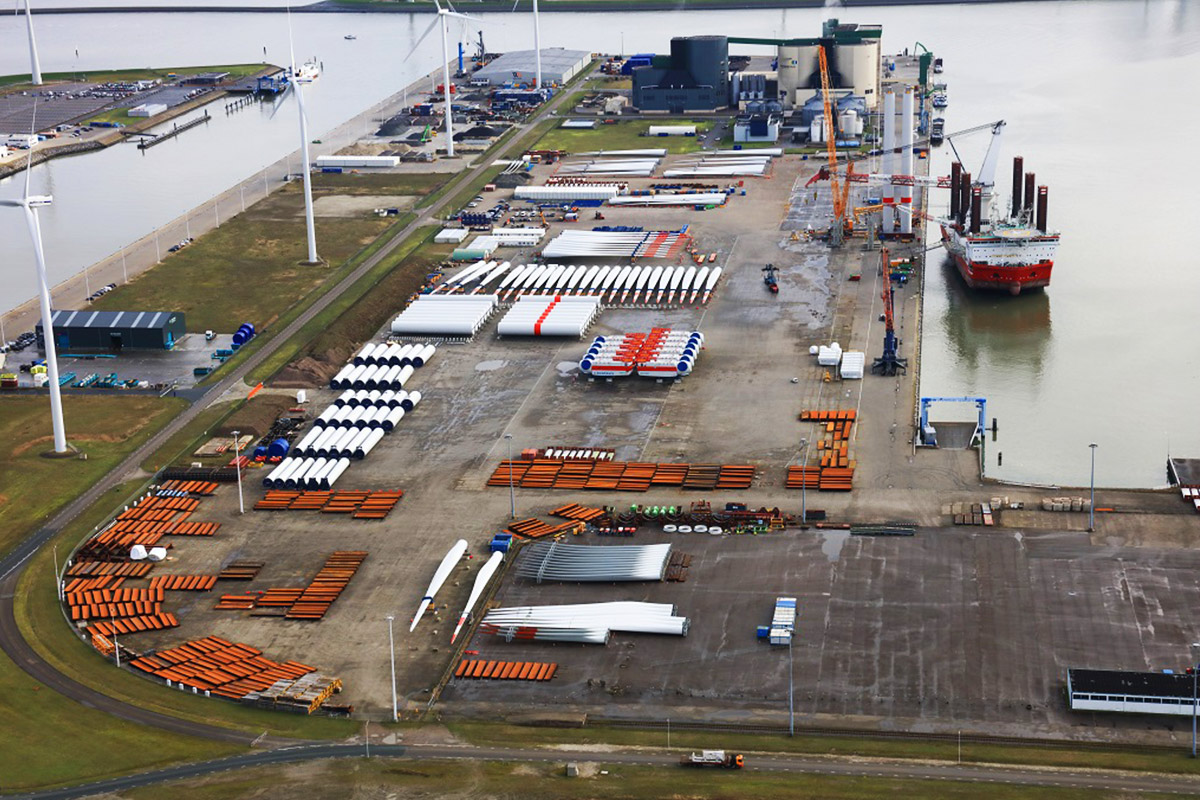 Hamburg/Eemshaven, 11 March 2020. Buss Terminal in Eemshaven has been awarded a contract for another project: From May on it will serve as the base port for the installation of foundation structures for the Hornsea Two offshore wind farm. Approximately 140,000 m² of the 250,000 m² heavy lift terminal will be used for this project.

The wind farm will be located approximately 89 km off the Yorkshire Coast in the North Sea. “We are delighted to have won a project of this size in UK waters. This underlines the combined strength of our project team in Hamburg and our terminal in Eemshaven”, Martin Schulz, Managing Director of the Buss Energy Group, comments the upcoming project.

The wind farm which is owned by the Danish energy group Ørsted will consist of 165 Siemens Gamesa 8-megawatt turbines. With a total capacity of almost 1.4 gigawatts, it will supply about 1.3 million households with green energy. The Hornsea Two wind farm will span an offshore area of 462 km² and when fully operational in 2022 be the largest offshore wind farm in the world.

Buss Terminal Eemshaven has won the tender issued by DEME Offshore in February and is now responsible for handling, storage and terminal logistics of the 165 monopiles and transition pieces at its own terminal site. The monopile foundations of the wind turbines each weigh up to 1,230 tons. This equals the weight of around three fully loaded Boeing 747-400 aircrafts.

Groningen Seaports’ CEO Cas König, full of pride: “We’re delighted that DEME has once again chosen Eemshaven as the base port for this enormous project. Hornsea Two is the seventeenth offshore wind farm to be installed via Eemshaven. Not only is this the largest wind farm off the English coast: it is also the largest wind farm ever built via Eemshaven. And of course it’s a great achievement for Buss Terminal Eemshaven, which has already proven its ability to handle this kind of gigantic project. It’s also good for the activities in the seaport and for employment. It shows that Eemshaven really has grown into one of the North Sea’s most important offshore wind ports.”

Since 2009 Eemshaven plays an important role regarding assembly and shipping activities of wind turbines. Eemshaven lives and breathes offshore wind. The port has become a base, marshalling and service port of note for offshore windfarms especially in the German neighbouring part of the North Sea. Eemshaven is geographically well-situated for the offshore wind activities. Moreover, Eemshaven meets all maritime requirements and has the facilities regarding the assembly and shipping of wind turbines. This results in an impressive track record: Eemshaven has already been involved in the construction of 16 wind farms and is home to the maintenance bases for 4 wind farms.