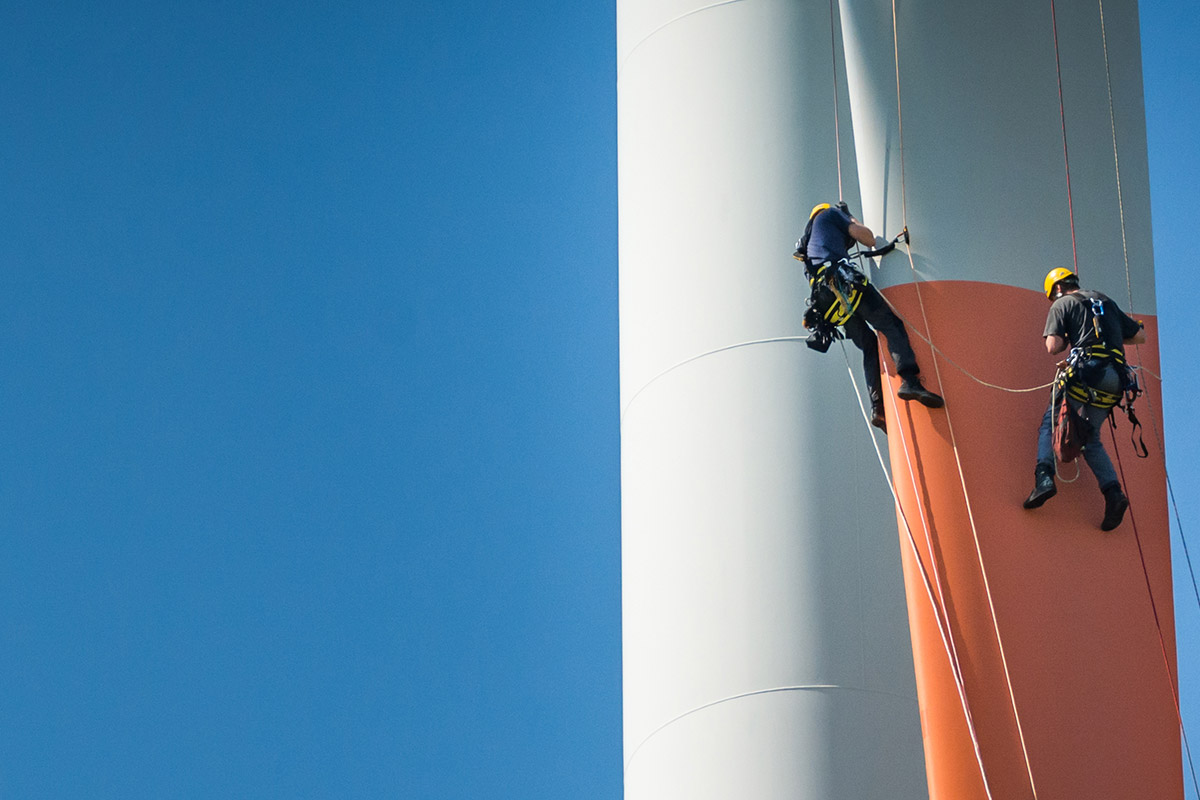 Europe installed 14.7 GW of new wind energy in 2020. 80% of this was onshore wind. Europe now has 220 GW of total wind energy capacity. But Europe is not building enough new wind to deliver the Green Deal and climate neutrality: the EU is set to build 15 GW per year over the next 5 years – it needs 27 GW per year to deliver the 55% emissions reductions by 2030. Permitting remains the main problem. Energy intensive industries aiming to decarbonise their activities are concerned.

Today WindEurope published statistics on wind energy in Europe in 2020. Europe built 14.7 GW of new wind farms in 2020. This was 19% less than what was expected before COVID. 80% of the new capacity was onshore wind. The Netherlands built the most (2 GW, mostly offshore) followed by Germany, Norway, Spain and France. The EU27 accounted for 10.5 GW of the new capacity.

Looking ahead, WindEurope expects Europe to build 105 GW new wind farms over the next 5 years, over 70% of which will be onshore. But this is well below the pace needed to deliver the Green Deal and climate neutrality. The EU27 are set to build only 15 GW per year of new wind over 2021-25, whereas they need to build 18 GW per year over 2021-30 to deliver the existing 2030 EU renewables target and 27 GW per year to deliver the higher target that’s now coming with the 55% climate target.

The main problem is permitting. Permitting rules and procedures are too complex, and government at all levels are not employing enough people to process permit applications. The result is it’s taking too long to get permits for new projects, permit decisions are being challenged in courts and developers are deterred from pursuing new projects because of the risks and costs involved. Governments need to take urgent action to address this.

Meanwhile the number of older wind turbines reaching the end of their operational life is increasing. In 2020 Europe decommissioned 388 MW of wind energy. Many decommissioned wind farms are being repowered but not enough of them. Obstacles to repowering resulted in Austria ending 2020 with less wind capacity than it had at the start of the year. In the next five years 38 GW of wind farms will reach 20 years of operation and require a decision on their future: repowering, life-time extension or full decommissioning.

Germany which has long been the engine of the wind energy in Europe only installed 1.65 GW of wind farms last year, its lowest in a decade. Many of its wind auctions were undersubscribed. Permitting has been the main problem, but the number of new wind farm permits actually increased last year. This suggests a recovery is ahead, but Germany remains far off from what it needs to install to meet its renewables targets. More encouragingly, Poland built a significant amount of new onshore wind and has committed now to a major build-out of offshore wind. France saw further steady expansion of onshore wind and will start installing its first commercial offshore wind farms in the coming years.

Giles Dickson, WindEurope CEO, said: “Wind is now 16% of Europe’s electricity. But Europe is not building enough new wind farms to deliver the EU’s climate and energy goals. The main problem is permitting. Permitting rules and procedures are too complex. There are not enough people working in the permitting authorities to process permit applications. Governments have to address this. Otherwise the Green Deal is at risk.”

And it’s not just the wind industry that’s worried. So are Europe’s core manufacturing industries that are looking to wind energy to support their decarbonisation goals. Steel and chemicals are two energy-intensive sectors that both want more wind farms, to help electrify their processes or to power them with renewable hydrogen. Their competitiveness depends on adequate amounts of affordable wind energy.

Marco Mensink, Cefic Director General, said: “Renewable electricity including wind power is a cornerstone in the decarbonization of the Chemical industry in Europe. We simply need it, we need it at a competitive price and we need more, both for direct electrification and to fulfill our central role in the hydrogen economy. WindEurope’s new figures clearly reveal a problem in the future supply as simply not enough capacity is added. The sheer volume needed by different industries, who all will increase electrification at the same time and increase demand requires targeted action. A specific focus on electrification in industry, sectoral roadmaps to inform and strengthen the Commission’s Industrial Ecosystems model, greater policy coherence across the board and adaptive state aid and competition law frameworks to enable the new models of cross-sector cooperation which President von der Leyen has called for are all needed.”

Axel Eggert, EUROFER Director General, said: “The EU needs to speed up significantly the installation of wind capacity that provides affordable electricity for Europe’s green transition. Wind energy and steel already today form a critical ecosystem in Europe and will so even more on Europe’s way to carbon neutrality and circularity. Our industry is eager to deliver not only 100% recyclable, perfectly circular steel to its clients, including the wind industry, but also steel that is CO2 neutral. For this, we need wind energy to help providing the 400 TWh of electricity that our industry requires by 2050, an amount comparable to the electricity consumption of France.”

Join us for the Wind Energy in Europe 2020: Trends, statistics and five-year outlook webinar

Register for the webinar

« New WindEurope Infographic: the EU’s Recovery and Resilience Facility
Are the offshore winds of change coming to the Black Sea too ? »