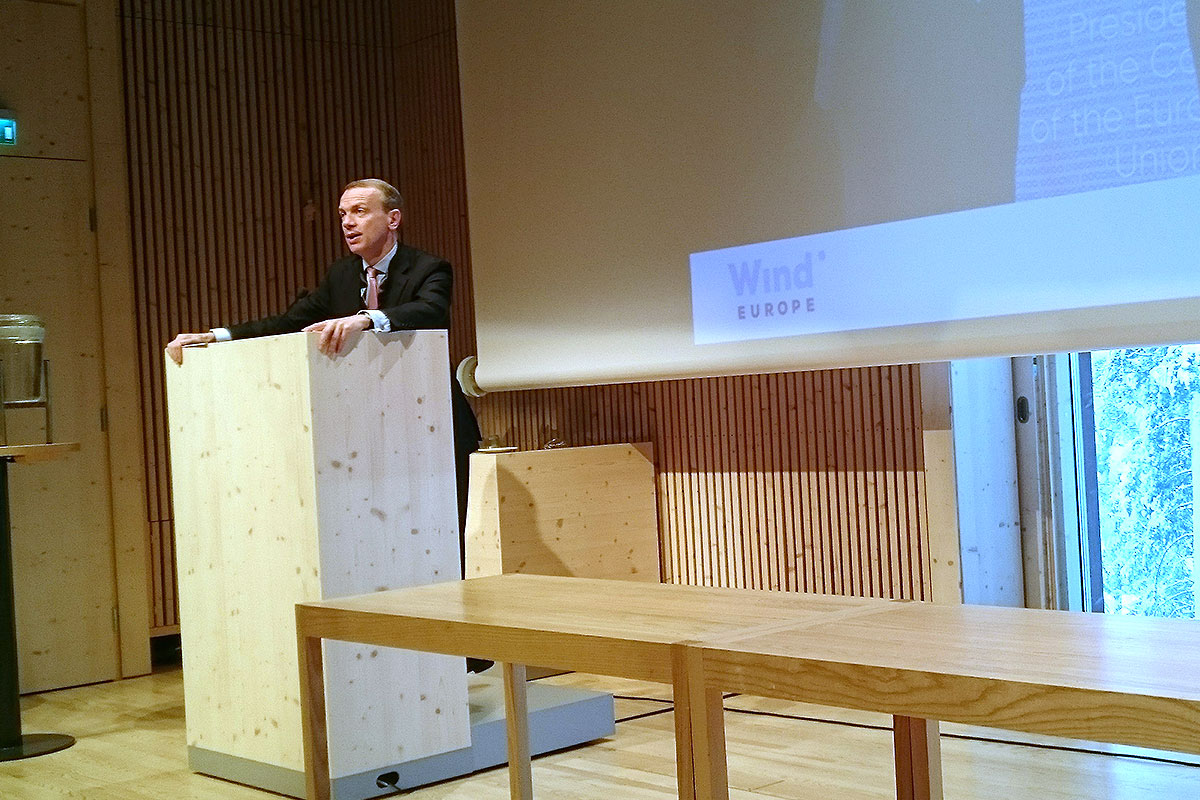 WindEurope CEO Giles Dickson met with the Finnish Energy Minister Kimmo Tiilikainen on 26 October before presenting with the Minister at the annual conference of the Finnish Wind Energy Association.

Finland has 2 GW of installed wind capacity today, and wind is 4% of its power mix.  The Government has wound up the FiT scheme and plans to run a first auction for new renewables capacity in autumn 2018. The consultation on the auction is coming to an end, and the Government will submit firm proposals to the Parliament for approval in November. It plans two auctions of 1 TWh each. These will be technology-neutral, though they exclude hydropower. A mix of fixed and sliding feed-in premium will be on offer.

Kresten Ørnbjerg of Vestas also took part in the meeting with the Minister, along with Anni Mikkonen, CEO of the Finnish Wind Energy Association.

The wind industry urged the Minister to stick to the planned timetable for the new auctions. It was essential that the first auction should happen well before the elections due in spring 2019 so that the new system was well embedded before any new government took office. For industry planning, investments and cost reduction, governments also have to set out their forward auction plans in good time and stick to them. The Minister was sympathetic and hoped the EU Commission would approve the new scheme quickly: his officials are already liaising with DG COMP.

In the same context of giving clear signal to industry, Dickson said it was important to retain the 3-year visibility requirement (for RES support) in the EU Clean Energy Package – and as much detail as possible in the template for the National Energy Plans required under the Package.  The Minister noted the determination of the Estonian Presidency to make rapid progress in the Council on the Package but agreed it was also important to retain the quality of the legislation.

The wind industry thanked the Minister for Finland’s strong support of the proposed (550g/KWh) emissions performance standard for capacity mechanisms. When Dickson asked him to support the retention of not strengthening of the cooperation mechanism, he was sympathetic on the latter and very interested to learn about the imminent agreement between Lithuania and Luxembourg. He saw a clear link between the cooperation mechanism and enhanced regional cooperation in the Baltic on offshore wind.

Kresten highlighted the growing importance of effective planning regimes for the further expansion of wind, not least with turbines getting taller and more powerful.

The Minister highlighted the recent agreement (this week) between the Finnish Government and the Åland Islands on a 100% renewables pilot project. The idea was that Åland would showcase the feasibility of 100% RES (with wind as the basis). The project would need EU financial support because legally the Finnish Government could not support it. The wind industry representatives agreed that we should engage the Åland authorities and help them and the relevant local wind farm developers.

In his speech at WIND 2017, the Minister stressed that the 2 TWh auctions were only a start. Finland was committed to a 50% renewable share of its energy by 2030, and (further) wind would play a key role in delivering this. He also highlighted Finland’s 2030 targets for RES to be 30% of transport fuel and to cut fossil fuel use in transport and heating by 50%. Dickson stressed the importance of the electrification of heating and transport to increase the share of RES in the energy mix – and the growing feasibility of integrating higher shares of variable RES in the energy mix.