With the growth of wind power right across Europe, we expect to see a significant rise in demand for the critical materials needed for wind energy. But just how rapid is this growth expected to be, both on- and offshore? And will supply-chain bottlenecks emerge for these materials?

In this Member’s Insight, Petra Manuel – Senior Analyst, Offshore Wind at Rystad Energy – provides us with an outlook for critical and non-critical material demand in the decades to come.

Rising wind: Demand for wind energy materials to triple in next 15 years

Wind energy deployment has taken off as more and more countries strive to make their economies and energy systems greener. This rapid growth has sparked concern that supply-chain bottlenecks may emerge for some of the critical materials used in wind-power technology. Rystad Energy estimates that annual demand for materials will triple by 2035 for offshore wind and rise by 50% for onshore wind materials. Demand for rare earth materials in particular will triple for offshore wind and double for onshore wind, at a time when these materials are also in strong demand from other industries. This commentary takes a closer look at the outlook for material demand for onshore and offshore wind power, including both critical and non-critical materials.

A “critical” material is defined as a material that requires an extensive extraction efforts or that is prone to substantial price fluctuations that can result in supply-demand bottlenecks. Figure 1 presents the relative importance of critical materials used in wind energy technologies, broken down into the main components: blade, tower, nacelle, gearbox, generator, foundation, and cable. For simplicity purposes, we have omitted the materials required for offshore substations. Our analysis shows that all components contain at least one critical material. Towers, nacelles and generators are the components with the most critical materials, while foundations only contain one critical material. 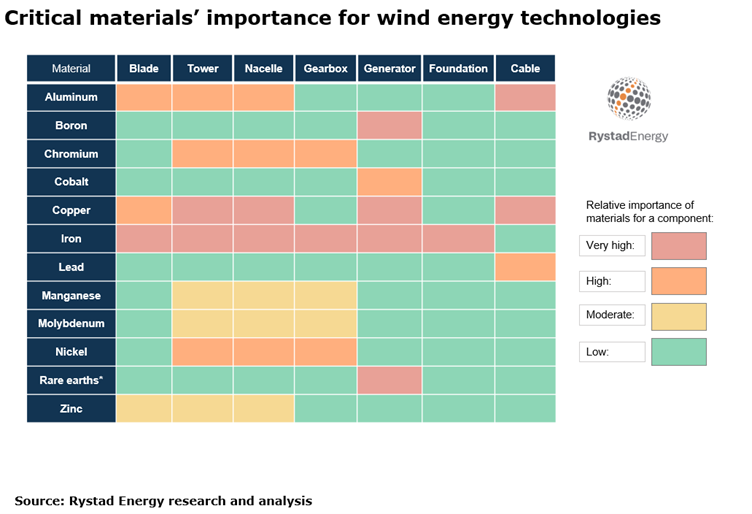 Iron is the main constituent in steel and is therefore required for most wind power equipment, especially towers and offshore turbine foundations (Figure 1). For illustration, a 100-metre-high tower with a 10 MW turbine weighs almost 800 tonnes, constituting typically more than 60% of the weight of the entire wind turbine. Historically, iron has not been considered a critical material, but the recent price fluctuations for steel indicated an imbalance in supply and demand. Many base metals, including nickel, molybdenum, manganese, and chromium, are also on the list because of their use in steel production. In addition, some rare earth minerals including neodymium, dysprosium, praseodymium, and terbium are essential in permanent magnet generators. NdFeB (neodymium-iron-boron) permanent magnet usage in wind power has been widely discussed in recent years in terms of the shortages of rare earths, which may be a hindrance for massive wind power deployments in the long term. Around 80% of rare earths were produced in China in 2021. In terms of the global reserves, China, Brazil, Russia, Vietnam, India, and Australia accounted for about 90% of the world’s rare earth reserves in the late 2010s.

Copper has historically been used for transmission cables in onshore and offshore wind farms, but is now increasingly being substituted by aluminium, which is lighter, cheaper, and available in more abundant supply. At the same time, copper is still required for permanent magnet generators. In that respect it’s important to note that larger turbines typically use direct-drive turbines, removing the need for gearboxes, which are more common in smaller, onshore turbines. The advantage of a direct-drive turbine is that by eliminating gearboxes, the size of the turbine’s permanent magnet generator is reduced, which brings down the overall turbine weight. For instance, the generator for a 12 MW turbine can reach about 150 tonnes, while the nacelle for the same turbine is between 500 and 600 tonnes.

Overall capacity additions for wind power are expected to peak in the five-year period between 2031 and 2035. The pace is different for onshore and offshore, however: While onshore wind capacity demand is expected to decline starting from the 2036-2040 period, capacity additions offshore are set to keep rising to a peak of 350 GW in the 2036-2040 period. In terms of the number of units installed, about 120,000 turbines are envisaged to be installed in the 2031-2035 period, corresponding to an average size of turbine installed of 7.8 MW. As turbine size is poised to grow long-term, the number of turbines is envisaged to slip to just more than 50,000 in 2046-2050, indicating an average turbine size of around 12 MW globally (Figure 2). To estimate how the rising installations of wind power will affect materials demand, we have looked at the amount of materials needed for wind energy technologies in 2021, 2035, and 2050. Based on our long-term forecast, annual onshore wind capacity additions are set to rise from 90 GW in 2021 to 128 GW in 2035, before more than halving to 61 GW in 2050. For offshore wind, the pattern is the same, though the growth is stronger through 2035 and the decline thereafter is not as steep: installations are set to climb from 18 GW last year to 61 GW in 2035, before slipping to 53 GW by 2050.

Starting with onshore wind, our calculations are based on 10 wind farms of 50 MW each, which are assumed to have used 3 MW turbines in 2021, 8 MW turbines in 2035, and 10 MW turbines in 2050, all with concrete foundations. This scenario shows demand for most materials for onshore wind will increase between 25% and 50%. Concrete makes up the largest share of materials by weight as it is used in the foundations (Figure 3). Steel and iron follow in second place with about 15 million tonnes needed for onshore wind in 2035. In the same year, about 0.9 million tonnes of fiberglass will be needed for turbine blades. We expect the intensity for copper and aluminium for onshore wind to stay relatively flat because new onshore wind farms are expected to be more decentralised, which will minimise the distance to available substations. We expect the share of floating foundations, especially semi-subs, to increase towards 2050. Currently, a semi-sub foundation has a higher steel intensity than a monopile and can weigh three times as much while holding the same turbine size. Global steel production reached 1,952 million tonnes in 2021, and we therefore do not foresee much risk regarding steel supply for the offshore wind market in the long term. Even so, there could be steel supply constraints for developers and manufacturers in the medium term as the ongoing war in Ukraine may create bottlenecks.

Demand for cast iron, which is used to construct nacelles, is expected to reach about 8 kilotonnes in 2035. Many companies are currently researching how to produce more lightweight nacelles and blades. Our analysis also shows that the demand for NdFeB material for onshore wind and offshore wind could end up at 60 kilotonnes in 2035 and 40 kilotonnes in 2050. As the rare earths account for about a third of the NdFeB material’s weight, there will be about 20 kilotonnes of rare earths needed in 2035 – compared to a global production of only 280 kilotonnes of rare earths in 2021. More than 8 million tonnes of neodymium are available, meaning that there will be adequate supply in the long term – however, supply could become a challenge in the medium term.

Find out more about Rystad Energy