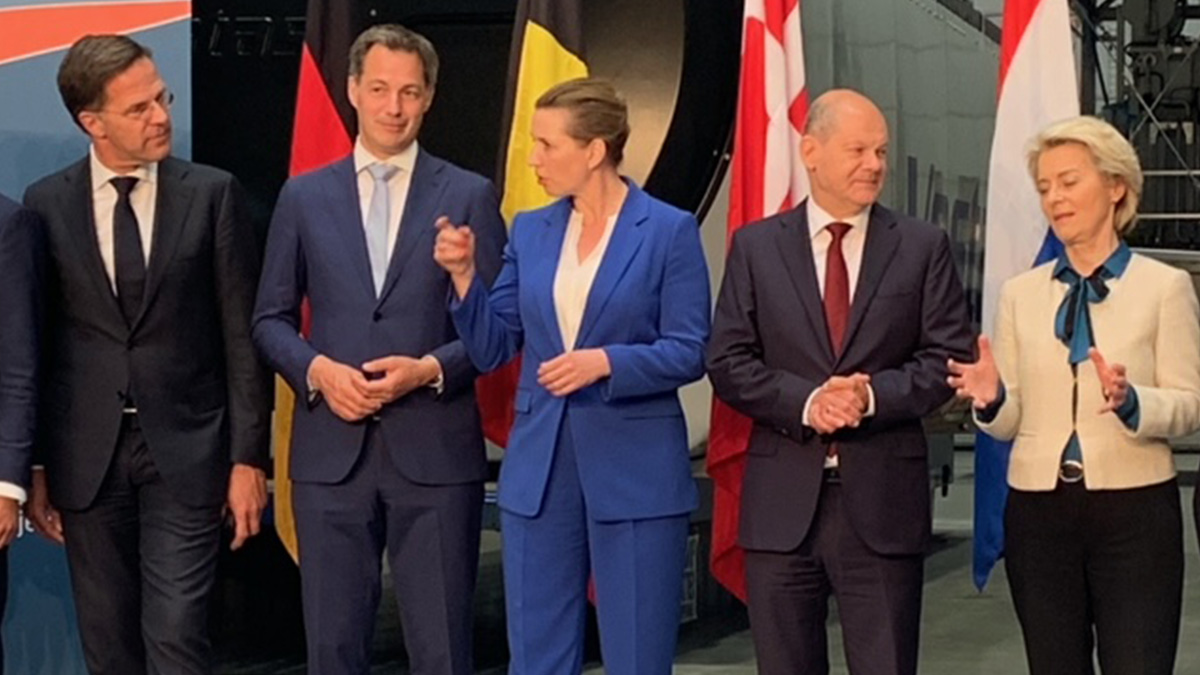 The President of the European Commission Ursula von der Leyen, the German Chancellor Olaf Scholz and the Prime Ministers of Denmark, Belgium and the Netherlands met in the Port of Esbjerg (Denmark), one of Europe’s leading offshore wind ports, for an important offshore wind summit. Together they signed a declaration on a common vision for offshore wind and related infrastructure in the North Sea.

In the Esbjerg Declaration the four Heads of State committed to jointly building 150 GW of offshore wind energy in the North Sea by 2050. They also pledged to collaborate more closely on joint offshore wind projects, energy islands and offshore grid infrastructure. The declaration strengthens renewable hydrogen production in the North Sea. The four countries want to have 30 GW of electrolyser capacity by 2030. In a separate Declaration the energy ministers of the four countries provided more details on these commitments.

The summit took place on the very same day the EU presented the REPowerEU Action Plan, its strategic plan to wean Europe off Russian fossil fuel imports and accelerate the expansion of renewables. Von der Leyen’s presence in Esbjerg underlines how central the expansion of wind energy is for Europe’s energy system.

Giles Dickson, WindEurope CEO, says: “It’s fantastic that the four EU North Sea Heads of Government and the European Commission President are coming together in Denmark to make new commitments on offshore wind. And that they’re doing so the very day the EU launches its big REPowerEU action plan to transform Europe’s energy system. But the new commitments on wind will only be delivered if Europe has a viable wind energy supply chain and if it simplifies the permitting of wind farms. Good things are now happening on the latter. But the former needs major attention: Europe’s five turbine manufacturers are all operating at a loss today.”

Jochen Eickholt, Siemens Gamesa Renewable Energy CEO, says: “480 GW by 2030 – the European Union and Member States want much more wind energy. Siemens Gamesa is ready to take up the challenge to deliver these additional volumes. But Europe’s wind energy supply chain is in bad health. Costs for raw materials and components are increasing. Auction design is mainly cost driven while risk is not well distributed along the value chain. The industry is struggling to be profitable. Abstract targets alone are not enough. We need targeted support to maintain Europe’s technology leadership in offshore wind.”

Sven Utermöhlen, RWE CEO Offshore Wind, says: “Maritime Spatial Planning, the general availability of accessible seabed for both wind farms and grid infrastructure, and faster permitting for both on- and offshore wind are key enablers for the expansion of offshore wind energy. Europe must rigorously drive maritime spatial planning and simplification of the rules and procedures for permitting new wind farms. The REPowerEU Action Plan is a great step forward in that direction. Also, the declaration signed today in Esbjerg demonstrates the high commitment of national governments to accelerate the build-out of offshore wind energy.” 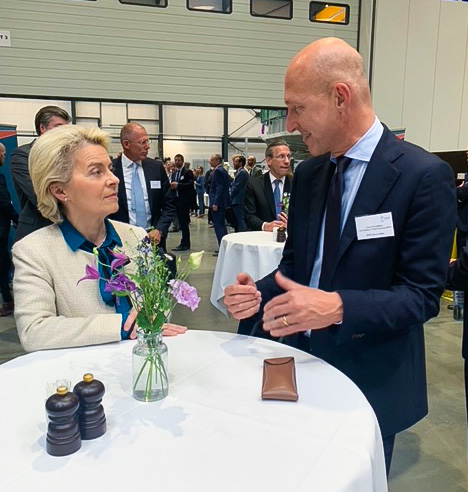 Mads Nipper, Ørsted CEO, says: “Offshore wind will be a cornerstone in securing European energy independence and in fighting climate change, and the build-out should be accelerated dramatically in the coming years. We need to allocate sites in large chunks, quickly, rather than one by one. Tenders of offshore wind sites also need to ensure broader societal value-creation rather than focusing only on price. With an EU ambition of 300GW offshore wind in operation by 2050, the future challenges aren’t cost but rather to integrate large-scale variable energy into the power systems and to secure that the build-out happens in harmony with nature. Governments can activate industry know-how and innovation to solve these challenges by incorporating criteria for such broader value creation in tenders.”

Chris Peeters, Elia Group CEO, says: “Electricity grids at sea are becoming increasingly complex. We are evolving from building point-to-point connections to constructing energy hubs that are linked to hybrid interconnectors. If offshore wind development is left to an uncoordinated country-by-country approach, a substantial part of Europe’s offshore wind potential will be left untapped. At least 7 European countries are currently developing hybrid interconnectors. These projects could be rapidly rolled out if a conducive investment climate is secured. This would provide all involved parties with a framework that would limit project risks and complexity and would thus make them sufficiently attractive. By de-risking the investment, capital costs would decrease and innovation and competition would be able to play their full role in providing European consumers with green electricity in an efficient way.”

Henrik Andersen, Vestas CEO, says: “It is a very important announcement and we are very pleased with the political ambition level and that we now see decades of debate turn into decision making. We must act now and accelerate the build-out of wind power to fight climate change and secure energy independence. It is essential that we get the targets translated into permits and permits into projects, high-quality technology and jobs.”

To reach climate neutrality by 2050 offshore wind needs to grow from 15 GW in the EU today to 300 GW by 2050. With the signature of the Esbjerg Declaration Belgium, Denmark, Germany and the Netherlands committed to delivering half of these 300 GW in their parts of the North Sea alone. Over the same period the EU wants onshore wind to grow from 173 GW to 1000 GW. The European wind industry will continue to ensure the expansion of offshore and onshore wind goes hand in hand with the protection of biodiversity and in dialogue with local communities and other stakeholders.

« Leading international trade fair WindEnergy Hamburg and the H2EXPO & CONFERENCE are setting their sights on the increased development of renewable energies.
Europe puts fast permitting of renewables at the heart of its energy security plan »