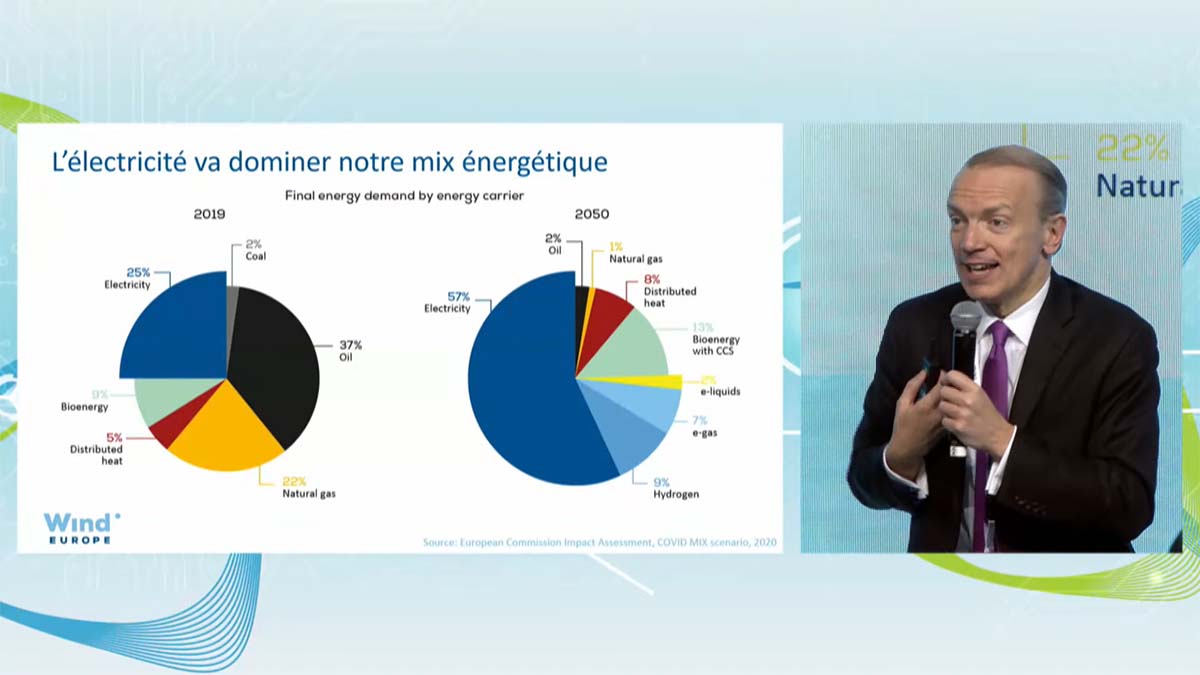 On 14 October WindEurope CEO Giles Dickson spoke at the 11th Colloque National Éolien in Paris, organised by France Énergie Éolienne. Wind energy is indispensable for a successful energy transition in France. And it brings additional benefits to citizens: last week the French Minister for the Ecological Transition, Barbara Pompili, and representatives of the wind industry jointly presented 10 measures for a “controlled and responsible” deployment of wind. This will ensure high standards in environmental protection, happy coexistence with local communities and preservation of France’s cultural heritage.

The share of electricity produced by wind in France exceeded that of fossil fuels last year for the first time ever. Wind is now 8% of France’s electricity and holds second place in renewable energy production after hydropower.

France aims to have 34 GW of onshore wind by 2028, up from 18 GW today, according to its Programmation Pluriannuelle de l’Énergie (PPE). This expansion is indispensable for a successful energy transition, not just to get more renewables in electricity but to help decarbonise the rest of France’s energy mix, notably in industry and transport. Fossil fuels currently account for 60-70% of France’s total energy mix. But France isn’t building enough renewables to deliver its decarbonisation goals: it’s building only 1.3 GW of new onshore wind each year when it should be building 2 GW.

Permitting remains too slow and too complex. The authorisation procedures for new wind farms in France have been significantly delayed, making the current pace of build-out inconsistent with France’s PPE. Major investments in the grid are also needed to ensure that the electricity produced locally by wind can reach its final consumers. Hybrid wind and solar projects should also be further encouraged. And the EU must get its new State Aid Rules right to accelerate the deployment of wind, crucially by allowing national governments to hold technology-specific auctions, design good revenue stabilisation mechanisms such as two-sided Contracts for Difference (CfDs) and to support storage and renewable hydrogen technologies.

Wind energy is not only a must-have for France and other countries to reach their climate targets, it also benefits their society and local communities. 80% of French people think wind has an important role to play in the energy transition. 23,000 people work in wind in France and this number is rising. And the sector contributed €220m in local tax revenues last year, primarily to small and rural municipalities.

To maximise these benefits, on 5 October French Minister for the Ecological Transition Barbara Pompili and the Presidents of France Énergie Éolienne and Syndicat des Énergies Renouvelables jointly presented 10 measures aimed at ensuring the future deployment of wind energy will be “controlled and responsible”.

These 10 measures provide for even higher standards of project appraisal at regional level, with prefects mapping out suitable areas for new wind farms, take account of local environmental issues, and the appointment of a mediator at the Ministry. They also give strong guarantees to local residents with limitations on noise and light emissions, and end-of-life rules such as the removal of turbine foundations – plus new recycling targets. Local mayors will now also be more involved in the expansion of wind with the creation of regional “energy committees”. And there’ll be increased support for community projects and the creation of a Fund for the safeguarding of local natural and cultural heritage.

These measures are the result of a successful collaboration between Government and industry. They were tabled in parallel with the launch of a new platform by the wind sector listing 19 propositions aimed at enriching the debate around the future of wind energy in France.