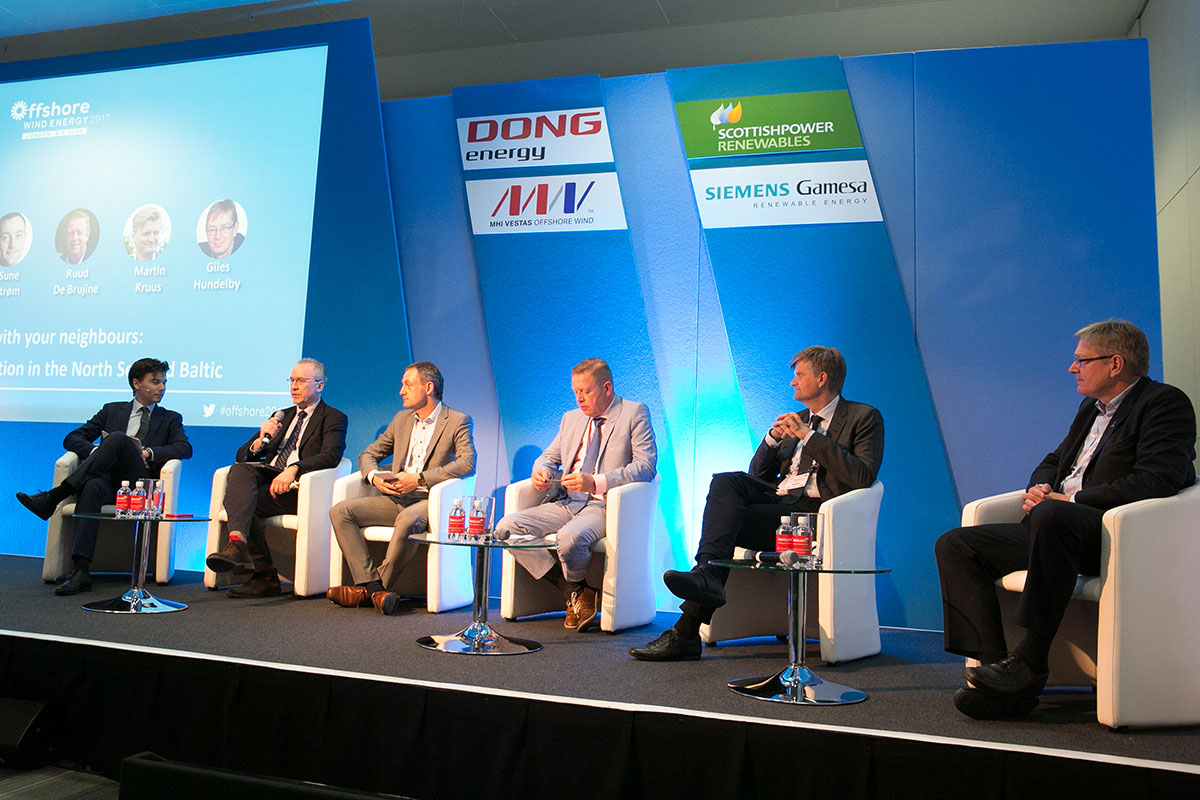 At a time when the offshore industry is seeking to secure the volumes to power its future, regional cooperation is necessary to drive large investments.

This was one of the key points raised at a conference session moderated by WindEurope’s Joël Meggelaars at Offshore Wind Energy 2017 in London this afternoon. The session looked at progress made since the signature of the North Seas cooperation agreement by 10 countries in June 2016. This agreement was a first step in incentivising regional cooperation, making a top-down commitment to driving bottom-up concrete steps on grids infrastructure, maritime spatial planning and an enabling regulatory framework for offshore wind. Throughout the discussion, speakers explored how such an agreement might be developed and replicated in the Baltic.

Brendan Devlin, advisor to the Directorate General for Energy of the European Commission, took up Pineda’s point. He said that the European Commission has received a mandate from the Member States to facilitate cooperation in the North Seas. Currently there are four support groups in operation. However, while all four groups display palpable progress, a significant problem persists: while companies regard the entire North Seas region as a resource, Member States continue to focus on optimising their respective national interests.

Martin Kruus, Chairman of the Board of Estonian Wind Power Association addressed this problem as it might apply to the Baltic region. He said that the future of the power mix in the Baltic is not yet politically debated, and predicted that – in terms of its energy mix – the Baltic would soon be understood as one whole region rather than a constellation of distinct interests. Kruus stated that, in the Baltic region, power market reform and the phasing out of conventional generation should come prior to any thinking about joint projects.

Here, Devlin stated that the very real benefits of cooperation are not widely seen and felt. Regional cooperation, he stated, cannot be imposed on the Member States; we must follow what the Member States are prepared to do and fund. If the national industries can see the long-term value of regional cooperation then they may convince national authorities to move faster. Sune Strøm of DONG Energy countered that such a dialogue would be both overly complicated and essentially irrelevant what with the advent of subsidy-free projects. Rather, he claimed, we should rather look into developing the grids to bring the offshore production to consumption centres.

On grids, Ruud De Bruijne of Netherlands Enterprise Agency added that grid expansion will be key to the development to the offshore sector. If grids do not develop properly, he said, this may limit the growth of offshore wind even with subsidy-free projects. Giles Hundelby of DVGNL stated that grid capacity should match offshore deployment.

WindEurope’s Iván Pineda insisted that the political momentum demonstrated 12 months ago now needs to be translated into regulation and implementation. He stated: ‘The new renewables legislation for the post-2020 period – the Clean Energy Package, currently being discussed between Member States and the European Parliament – will be crucial in creating the appropriate market conditions for offshore wind deployment to back up the political commitment.’

More on the Offshore 2017 conferences