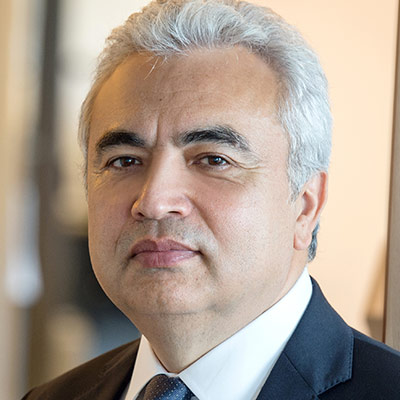 Prior to being elected as Executive Director, Dr. Birol held the positions of Chief Economist and Director of Global Energy Economics, with responsibilities that included directing the flagship World Energy Outlook publication.

He is also the founder and chair of the IEA Energy Business Council. Dr. Birol has been named by Forbes Magazine among the most powerful people in terms of influence on the world’s energy scene. He is the Chairman of the World Economic Forum’s (Davos) Energy Advisory Board and serves as a member of the UN Secretary-General’s Advisory Board on ‘Sustainable Energy for All’.

Dr. Birol is also the recipient of numerous awards from government, industry and academia. Prior to joining the IEA, Dr. Birol worked at the Organisation of the Petroleum Exporting Countries (OPEC) in Vienna, where his responsibilities related to analysis of oil markets.

In 2013, Dr. Birol was awarded a Doctorate of Science honoris causa by Imperial College London.